After releasing their first DVD in 2006, Arch Enemy unveils Tyrants Of The Rising Sun. It chronicles the band's March 2008 trip to Japan and concert in Tokyo. In addition to the standard DVD, there are also DVD/2 CD and double audio CD versions available.   The concert is 20 tracks (including solos) and is a good mix from Arch Enemy's discography. There are four songs from their ... 展开 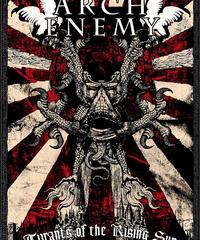